← back to
Confused Records
Get fresh music recommendations delivered to your inbox every Friday.
We've updated our Terms of Use. You can review the changes here. 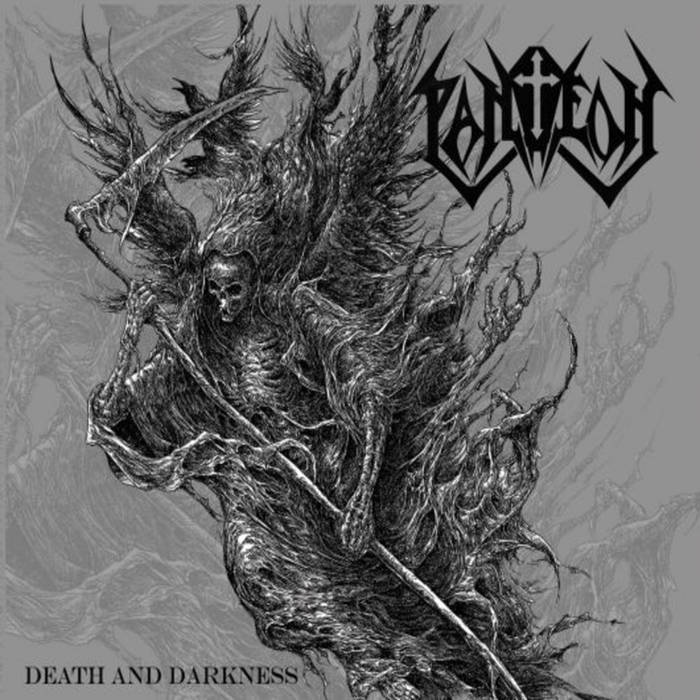 Originally Released in 2018 on CD

Death and Darkness, Panteon’s follow-up to Return of the Killer, is more of what you would expect from the Brownsville trio…simple, straight-forward and dark metal. The previous offering had an obvious blend of black and death metal (maybe a 50/50 split, if I had to give percentages to each style), but this album leans more towards the black metal side of things (80/20?). If you liked the previous offering, you are going to likely enjoy this one as well. The song structure and pace have stayed constant, but there are a few noticeable differences between the two releases. The first glaring distinction, to me, was the production. This release is a little under-produced, which is by no means a bad thing, because the production benefits the genre and Panteon’s style. The 8-song release was recorded again in Lake Jackson, Texas. It sounds like a well-produced demo, but, at the same time, this adds an element of darkness to the overall sound because it comes off as more raw and abrasive. Nothing is lost in the mix; it just has a rougher sound.

Hannibal’s Bathory-esque vocals are as decipherable as ever, which comes in handy for those (like me) who pay attention to lyrical content, especially since the band has again preferred to go with a minimal- presentation, digi-pack approach and leave the lyrics out. Panteon did experiment with a few things that weren’t present in their previous release; one additional element was the inclusion of keyboards, which can be heard on “The Rite.” The album ends with the appropriately titled song, “The End”. In this song, Hannibal breaks out into solo mode for the end of this one and does a nice job creating a somber mood in doing so. They nicely incorporated guest backing vocals on “The Rite” from fellow TXDMers Danny (Crucifixion) and Lazaro (Funeral Rites). “The Rite” also happened to be my favorite track on this release; its slow and driving pace gets the head slowly banging in unison with the music. The fact that this song starts with a short excerpt from one of my favorite movies, The Exorcist, has no influence on my enjoying the song (or does it?!). Panteon’s style will remain the same because that is how they did things in the past, is how they do them today, and is how they will continue to do them tomorrow. Fans of old-school, mid-paced, dark, black metal will rightfully eat this up, and luckily for you, Panteon will continue to make sure you don’t go hungry. (JP)

About Jaime Perez -
Jaime Perez is a founding member and drummer of McAllen Texas’ longest running death metal band, Severance. He has been a part of the Texas metal scene since the early ’80s and continues to do so to this day. His music collection, both cds and vinyl, tallies in at roughly 1500 physical copies and includes a variety of musical genres, although a vast majority is metal. In addition to churning out metal, Jaime is also a former high school English teacher, currently a librarian, and an award-winning author. He has published three novels, two of which have won awards. He can be reached at:
Email: jaimeperez917@yahoo.com
Twitter: @JPerezAuthor - Facebook: www.facebook.com/jaime.perez.188478

Emerging from the Brownsville Texas underground scene in 1990, Panteon is a 3 piece metal assault and one of the founding fathers of extreme metal in Texas. Panteon have crafted an original sound that seamlessly blends Black, Death and Thrash Metal into a brutal sonic assault that has stood the test of time and enabled the band to win a legion of fans in the 30 years since their inception. ... more

Bandcamp Daily  your guide to the world of Bandcamp